Returning to my roots...

Staff member
It's been a month of Sundays since I've been to the track, actually late 2019 to be more precise. It's been longer since anyone posted any "Track Times and Triumphs".

This Sunday was the All Ford event at the Mason Dixon Dragway in Hagerstown, MD. I entered the Blue Flame in the Cougar and Comet class to join up with some MN12 friends. 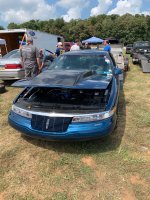 The first call to the lanes was a time trial. We lined up against a long time friend in his newly rejuvenated Cougar. The burn out was purposely longer than normal to make sure we had fresh rubber from the tires having been 'parked' for so long. I approached the tree, staged and waited for the lights. At the launch, I noted the red light in the opposing lane. The car seemed to pull hard down the track with a slight stutter at the 2-3 shift. The Cougar was besides me the entire way and it turned out to be a true fender race. 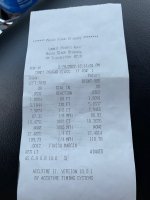 I returned to the pits to give the car a quick checkover and waited for the next round to be announced. The call to the lanes came about an hour later for the qualifying run to set up the field for eliminations.

The second run was against another MN12, this one with a turbo small block Ford that I previously noted to be a bit quicker. Since it was the qualifying run it was a heads up race that I did not expect to "win". Upon the launch I once again noted the red light in the opposing lane. This time there was no stutter in the 2-3 shift and the Lincoln was pulling hard the entire length of the track. 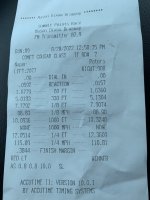 Remarkably, despite the increasing temperatures at the track, the car ran quicker, this time with an ET of 12.360 @ 110.81 mph.

Now it took a bit longer to be called back to the lanes for the first round of eliminations. This time I was lined up against a significantly faster supercharged Marauder. My previous run had earned me a "BUY" for my reaction time which allowed me to choose the lane of my choice. I chose to stay in the same lane as before. This time however, I was off at the tree and the Marauder did not red light. It was about half way down the track the Marauder was closing in and the car missed the 2-3 shift hitting the rev limiter. I lifted on the throttle to see if it would shift but it did not. I then nudged the shifter forward to be sure I had not inadvertently left it in 2nd gear. It was in drive and not 2nd, so as the Marauder passed me, I lifted off the throttle and coasted the rest of the way down the track.

Eliminated in Round 1 is not how I wanted my day to end but I still had the good vibes from the previous runs being what they were after having been away from the track for so long. It was a typical hot and muggy day in August at the Mason Dixon Dragway and I left with renewed optimism the Blue Flame could break into the 11s on a good day in cooler weather. Hopefully we will see soon enough.
Last edited: Aug 29, 2022
J

Sounds awesome! I,ve gotta get mine to the drag strip at least once this year.

jyarosz said:
Sounds awesome! I,ve gotta get mine to the drag strip at least once this year.
Click to expand...

It's all that you make it to be. I can say there was a time that yesterday would have been disappointing, but honestly, despite being tired at the end of the day, I was exuberant! It was simply gratifying and uplifting to be 'back in the saddle'. I'm already scoping out the next opportunity.

As they say, a bad day at the track is better than a good day at work.

Staff member
Nice job! Any idea what happened to your 3rd gear shift?

Staff member
Paid Member
Looks like a great day at the track, all in all.

So glad to see you back out there!

billcu said:
Nice job! Any idea what happened to your 3rd gear shift?
Click to expand...

Tuning on the edge.

It's a newly built transmission and torque converter that I had put in back in 2019 and I have very limited passes with it. My guess is the acceleration rate was just slightly quicker, enough to hit the rev limiter. Once it hits the rev limit, it has to fall back significantly to be able to shift. It didn't feel like any mechanical issue, it actually felt like it had been inadvertently left in 2nd gear - I have done that before and that's exactly what it felt and sounded like. I regularly do the burnout in second gear so as not have the transmission shifting during the burnout. As I roll out of the burnout, I come to a stop before the staging lights, nudge the shifter into drive then click the OD off. I then roll up with a bit of throttle and stage.

In my mind, it means the acceleration rate of the combo is slightly quicker than before. I'll dial it back a couple hundred rpm and see how it responds.

driller said:
In my mind, it means the acceleration rate of the combo is slightly quicker than before. I'll dial it back a couple hundred rpm and see how it responds.

Oh man, 3 years is too long to be away from the track.

After digging into the tuning log a bit further, I also just now realized another contributing factor. In the midst of the issues with the transmission, I had also installed new wheels and tires and had never adjusted the N/V value in the tune to account for the smaller 26 inch diameter tires compared to the previous 27 inch tires.

Of course the smaller tires means more revs over the same distance, albeit slightly, but just another component in being 'too close to the edge' and inadvertently hitting the rev limiter.

So yeah, not only should I lower the commanded 2-3 shift point, but I also need to correct the N/V value(s). 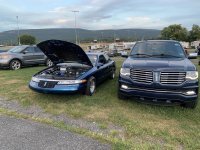 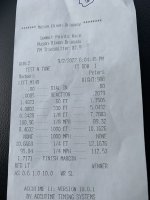 It did not however prove to be consistent. It was extremely busy at the track since a lot of participants had showed up to prepare for a big Labor Day weekend race and I only managed 4 runs. The second attempt was a little off at the 2-3 shift but still managed a 12.4511 ET at 113.35 mph. I attempted another tuning change with the shift point even lower at 6,750 rpms but once again hit the rev limiter on the 2-3 shift. Then finally, I switched back to the previous tune that has produced the 12.16 ET but once again missed the 2-3 shift!

Frustrated and running out of time, we loaded up and headed home. We've got some work to do to try to figure out what the heck is going on. The plan is to get the '96 off the lift and get the '93 up where we can pull the transmission pan and inspect everything. I'm beginning to believe it is not a tuning issue and something else is going on.
You must log in or register to reply here.
Share:
Facebook Twitter Reddit Pinterest Tumblr WhatsApp Email Share Link
Top