Staff member
Paid Member
With spring in the air, it was time to pull out the toys and have some fun. With plans of taking the Opal Opalescent '96 to Carlisle and then on the Hot Rod Power Tour, it was imperative to try to get the AC to work. It last worked probably sometime late 2019 as it has been literally sitting around since the start of the pandemic. I've moved it a time or two to make room in the garage for other projects but for the most part it hasn't really been used. I do remember feeling somewhat despondent when I moved it one time and noticed the AC wasn't working but it wasn't on the front burner, so we simply shrugged it off as needing to be recharged when the time came.

No problem except the one shop I had trusted before to work on my vehicles had closed their doors last year so I was forced to try to find another shop I would put trust in to work on my fleet. Not an easy task, especially when you have heavily modified vehicles such as mine. So I embarked on the journey as a "let's see what these guys can do" thing. So I called and setup an appointment for a state inspection and AC service.

After an hour or so of the car being in the service bay getting worked on, the service tech informed me the car passed inspection but they were trying to figure out why the compressor wouldn't run. OK, I thought, something simple like the cycling switch. They'll figure it out.

Well, not so lucky. After another hour or so they determined the VCRM was the culprit. Not a problem, I'm sure I have a spare I informed them. I would see if I could find time to work on replacing it or worst case I would return next week with the spare for them to change out. As it turned out, I managed some time over a couple evenings. For the life of me, I couldn't manage to access it from the top or underneath, so I bit the bullet and pulled the front bumper cover to be able to access it. I couldn't tell any difference after the removal and replacement but I made an appointment to return to the shop and have them finish the work.

So now in the second session, the service tech asked me to come take a look after an hour or so. He had diagnosed a wiring problem where there was no continuity between the VCRM and the AC clutch. I referred to the EVTM which I brought along and compared it to the schematic he was working from. There was some discrepancies but regardless we still could not establish continuity.

The day was fast ending, so the decision was made to put everything back together and I would try to further troubleshoot the issue or if I couldn't find the time, bring it back to them and allow their tech to continue the search.

To be continued...
J

Paid Member
Just out of curiosity did they verify there is freon in the system.I,ve worked on ac systems that had an ecm problem and I ran 12 volts right to the compressor for verification.

Staff member
Paid Member
The initial AC check not surprisingly showed literally no charge. They evacuated the system and held a vacuum for 20 minutes or so to verify no apparent leakage. They then charged the system with refrigerant and tried to engage the AC. They jumped the cycling switch to no avail and then attempted to diagnose why the AC clutch was not getting power. They did at some point apply power directly to the clutch to verify it functioned. With the VCRM replaced and everything else presumably in working order, that's when they started diagnosing continuity in the wiring.

As of today, I haven't had any time to look at the wiring. I was sidetracked when the DS power window suddenly decided it would not go up. I checked the switch and it is working, so now I have to pull the DS door panel for further troubleshooting.

Staff member
My 98 seems to have random wiring problems like that. Often I suspect the splices in the harness but they are usually so deep into harness I don't want to take apart the whole harness to get at one wire. The wiring diagrams show where the splices are in the back of the book but it's not worth opening all the wires up and risking other problems. I just run a jumper wire of the suspected wire, properly sized and soldered in, routed the easiest way. This is a great diagnostic tool too but if it works, I clean it up and call it a day. Also, does the connector look ok? Remember I fried my VRCM connector last year. 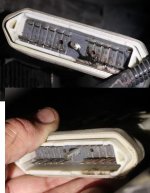 billcu said:
I just run a jumper wire of the suspected wire, properly sized and soldered in, routed the easiest way. This is a great diagnostic tool too but if it works, I clean it up and call it a day. Also, does the connector look ok? Remember I fried my VRCM connector last year.
Click to expand...

Yes, the connector looks pristine. I remember what happened to you last year at the Lincoln Homecoming. When I couldn't get to the VCRM, I was going to call you and ask how you were able to get to the VCRM without pulling the bumper cover.

Once I get into it, my backup plan is exactly what you describe, running a separate wire spliced in from the VCRM direct to the AC clutch. (It won't be going to the firewall, LOL)

First, I want to get a new AC clutch connector pigtail and temporarily use it to supply fused voltage and ground to the AC clutch to verify the clutch and compressor functions. Then I will go ahead and splice the new pigtail in place of the old one. In my experience that harness connection is the most suspect (because that's what Fords typically do).

Failing that, my plan is to identify the wires at the harness connections up next to the firewall and try to isolate which 'leg' in the circuit is open, starting from the AC clutch side. I certainly don't plan to track the wires along the entire course of the harness(es), especially the VCRM side.

Staff member
Yes, the VCRM is horrible to get to. I remember using 1/4" with U joint and still taking too long and cutting my hand up,

I had smacked it several times with the palm of my hand and later my fist with no luck.

The second blow with a dead blow hammer snapped it back to life!

driller said:
I had smacked it several times with the palm of my hand and later my fist with no luck.

The second blow with a dead blow hammer snapped it back to life!
Click to expand...

Glad to hear it! That usually works with a stuck motor from sitting too long. I see them try to do that on Roadkill all the time with starters and a wiper motor, but it doesn't work for them because they don't apply power while smacking it.
You must log in or register to reply here.
Share:
Facebook Twitter Reddit Pinterest Tumblr WhatsApp Email Share Link
Top