Hey guys, here I am almost ready to start my 1995 Lincoln Mark VIII powered 1957 Ranchero and I'm unable to locate what circuit 679 is or what it controls.
I have the car near completion, as far as mechanically anyway, the paint is yet to be finished, but the engine spins over and does everything except start.
I will NOT start this car till I have located and rectified this circuit 679 dilemma.
It's been an eight-year project due to health issues and I cannot wait to hear it run.
I have what was an early 1995 Mark VIII, but it NOT equipped with the "Tech II" diagnostics, so I've purchased and use both 1994 and 1995 Service Manuals as well as the 1994 and 1995 ETCM. I've spent more time trying to track this circuit down than I care to discuss. It runs through the in-line connector C-248, the circuit in question is a GY/BK wire and is under the dash near the firewall....
Anyone able to help an old guy out by telling me what this circuit controls?!
HELP!!!!
Thank you in advance! Dale
D

Okay, I found it and it is Vehicle Speed input and now I can finish the build and possibly start this thing on Thursday!

I've re-read your post a dozen times or more and cannot fathom why the Vehicle Speed Sensor would prevent the engine from starting? 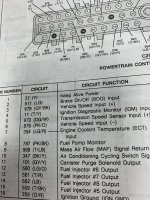 The 93-95 Mark VIIIs utilize 2 coil packs for ignition which are triggered via the Ignition Control Module. If it were me, the first test I would do is to check the coil packs are getting power.There should be a 3 wire harness connector to each coil pack. If I remember correctly, the middle wire is the power feed and the two outside wires are the signal wires from the Ignition Control Module. I would check the middle wire of each for +12VDC power. This would tell me the PCM is communicating with the ICM and both are getting power and you should be getting spark.

The Vehicle Speed Sensor may be a wild goose chase.

Staff member
Do you have fuel pressure?
D

Okay, Sorry to take so long to reply. I am battling Leukemia and am on Chemo daily for the past seven years. I have bouts of "unable to get up and do anything today" 'cause the Chemo is kicking my butt.
I did find the problem, it was a ground wire that was cut and I did not find it till about two weeks ago....
Thank you guys for chiming in and trying to help! I appreciate it more than you can imagine!
You must log in or register to reply here.
Share:
Facebook Twitter Reddit Pinterest Tumblr WhatsApp Email Share Link
Top