Does anyone have the schematic for a '93 VRCM? I picked up one from the yard last week and found it to be fried. I want to attempt to refurbish it but need a schematic to get the values of a few components.

Staff member
I'm not sure I've ever seen one. A block diagram maybe, but no real schematic. I'll look and if I come across it, I'll post it up.

Staff member
Sorry, I don't know where you can get that.

I just replied to say I hope you can find one. I tried to find a schematic for the JBL amp once. My service manuals don't show the schematics.

All these modules are getting old, and won't last forever, it would be nice to find out what fails on them.

Hopefully, someone might know where these can be found.
Last edited: Jan 26, 2011
R

Thanks for the replies. I figured the shop manual wouldn't have it. I wasn't sure if this info was supplied in the Powertrain control engine/emission diagnosis manual. This junkyard VRCM is probably too far gone to save as it has been "smoke checked" as we used to say in the Navy. But it does have 2 relays. One of them is a Bosch 40A that looks like a standard relay. The other is an Omron part that no longer exists in their listings but is probably superseded by another part number. I would imagine that a lot of VRCM's that are failing one of these relays. If such is the case, then the repair on these would be as simple as soldering in a new relay.
J

Let me look for you. (BIll, I listed a complete wiring diagram for all the JBL amps)
J

Sweet! :wave: Look here! (and click the "Thank" button, lol)
PURPOSE
The Variable Relay Control Module (VRCM) interfaces with the Powertrain Control Module (PCM) to provide control of the cooling fan, A/C clutch, and fuel pump. The module includes the Electronic Engine Control (EEC) power relay to provide power to the ECA.
These relays are contained in one housing, resulting in longer service life and reduced wiring requirements for operation.

CONSTRUCTION
The VRCM has one 24-pin connector. Relays contained in the housing are independent of one another.

OPERATION
The relays contained within the VRCM are interdependent and work with each other. The following describes the different relay functions within the VRCM:

EEC Power Relay
For any other circuit in the IRCM to operate, this circuit must be powered up. This prevents actuators from being turned "ON" without the EEC system having control over them.

Fuel Pump Relay
The fuel pump relay circuit controls the fuel pump. The ECA provides the ground circuit for the primary side of the relay. The secondary side supplies Battery Voltage (B+) to the fuel pump itself.

Electro-Drive Fan Relay
The Electro-Drive Fan (EDF) relay controls the electric cooling fan. The primary control circuit of the EDF relay is normally high (B+). In this state the low speed cooling fan runs continuously. The ECA grounds this circuit, pulling it low near zero volts, to turn the fan "OFF". This "fail safe" is built into the EDF circuit to run the fan anytime the EEC power relay is activated if the ECA should fail open circuit.

Wide Open Throttle A/C Control Relay
This circuit controls the A/C compressor clutch during normal operation. This circuit also disengages the A/C clutch as commanded by the ECA during Wide Open Throttle (WOT) conditions. This solid state relay has two control circuits. One is used to engage the A/C clutch upon demand from the vehicle operator and the A/C cycling pressure switch. The other control is used to disengage the clutch upon command from the ECA.

Power Ground
This circuit provides the VRCM with a ground source for operating various controls. The circuit uses one pin that goes to the battery negative terminal.

Staff member
J, that is a block diagram - not a true schematic. But it would help replacing certain components.
J


driller said:
I'm not sure I've ever seen one. A block diagram maybe, but no real schematic. I'll look and if I come across it, I'll post it up.
Click to expand...


We just got done doing this to Marvins Mark VIII. Switched one out from one of the parts cars on his to get it all working again normal.
We looked EVERYWHERE on the net. I could not find ANY electrical info on this even searching under the manufacturer of the box and part number who made them from Canada. Nothing.
I guess we could open this fried one up and back engineer it once we saw the goodies inside. Bound to be more leads and part numbers on the ICs in there to go from. As soon as i get it back from Marvin, im going to do it with my little dremmel and carfully cut the edge to open it up and see the holy grail....Wouldnt it be great if we could fix all of ours with about 15.00 worth of ICs and or capacitors?

J said:
Let me look for you. (BIll, I listed a complete wiring diagram for all the JBL amps)
Click to expand...

J,
Can you post the link to the wiring diagram for the JBL system and AMP?
I removed the AMP two year agos and wired in my new amp but I think the rear speaker are connect to the front speaker too.
J

J may I have access to those JBL diagrams as well please? Thank you.

Venti Dragon said:
J may I have access to those JBL diagrams as well please? Thank you.
Click to expand...

I found this in my archives... 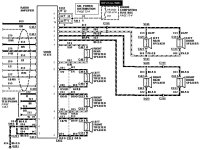 Staff member
The input connector from the radio changed starting in 95 when they changed the radio. That's why the amps are different from the 93-94 amps. You can wire in a pigtail and connector from the later year, or you can even remove that whole input cable from the loom and use a newer amp in a 93-94.

tixer said:
It's like LOD's greatest hits. I'll never complain when good technical information gets bumped. This was fun read.
Click to expand...

LOL... the stories I could tell about VCRMs now. If only I knew then what I know now.

driller said:
LOL... the stories I could tell about VCRMs now. If only I knew then what I know now.
Click to expand...

Have you managed to bypass all the functions using relays?

billcu said:
Have you managed to bypass all the functions using relays?
Click to expand...

Technically yes, just not all one the same vehicle.

I have bypassed the cooling fan function with a HD relay on the Blue Flame way, way back (though I can switch back control to the VCRM control when I need/want to). The external fuel pump on the Blue Flame is powered via a relay with ignition power. Then on the '96 I have the AC switched via a trinary switch and relay because of communication issues between the PCM and VCRM.

So, yes, if needed, one could run the fuel pump, cooling fan and AC circuits without a VCRM at all (at least on the Gen1).